CONSTRUCTION AGREEMENT IN RETURN FOR FLAT 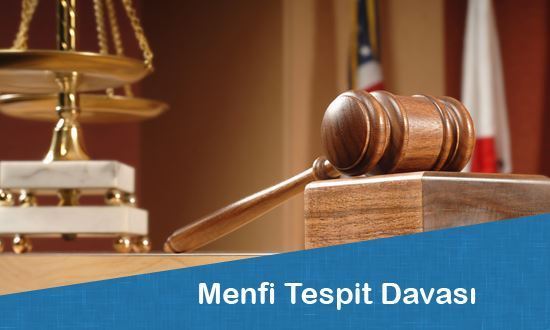 Before or during an enforcement proceeding, the lawsuit that must be filed in accordance with Article 72 of the Enforcement and Bankruptcy Law in order to determine whether the debtor is indebted to the creditor is the “negative declaratory action“. In this case, which has a negative determination as to whether there is a claim or not, the plaintiff is the debtor and the defendant is the creditor.

While the competent court is determined according to the value and characteristics of the claim, the competent court is the domicile of the creditor or the court of the place where the enforcement office is located. Such cases, which are subject to simple trial procedure, can be proved with any kind of evidence. The burden of proof lies with the plaintiff, who claims that he is not indebted or has paid the debt unfairly. A relative fee rate of 68.31 per thousand will be applied over the amount declared as not indebted to be claimed in the negative declaratory action.

If the debtor who has not objected to the enforcement or whose objection has been declined has paid the debt, he may file a lawsuit in the general court within the 1-year statute of limitations from the date of payment, and request the recovery of this money.

In the event that a negative declaratory action is filed before the execution proceedings, the court may issue a preliminary injunction, upon application, by asking the debtor to provide a guarantee, not less than 15% of the receivable, for the suspension of the proceedings. In this case, the enforcement proceedings cannot be made until the end of the case. In order to file a negative declaratory action before the enforcement proceeding, it is essential that the debtor who has filed the lawsuit is highly likely to face an enforcement threat and that he has a legal interest in filing a lawsuit.

In cases of negative declaratory action filed after the execution proceedings, it is not decided to suspend the execution proceeding through interim injunction. However, the debtor may request, by issuing an injunction, not to pay the creditor the money to be deposited to the execution cashier, from the court to which he has provided security, to cover the loss arising from the delay and not less than 15% of the receivable. In other words, in this case, the debt will be completely closed with all its accessories and a minimum of 15% collateral will be deposited in the execution file. In case of depositing the security, an interim injunction will also be issued.

If the case is concluded in favor of the debtor (in case the debt is resolved); the enforcement proceedings are stopped immediately and the enforcement is partially or completely reinstated without the need for a new provision, with the finalization of the decision. If the creditor unjustly caused the debtor’s negative declaratory action, upon the request of the debtor, with the filing of the lawsuit, it will be decided to collect the damage, not less than 40% of the receivable, from the creditor. In this case, no lawsuit can be brought against the debtor again based on the same debt reason.

In the event that the enforcement proceedings is concluded and the debt is paid by the debtor to the creditor, it will now be necessary to file an action for restitution(Replevin). The debtor must have paid a sum that he is not actually indebted, under the threat of enforced execution, with the finalization of the enforcement proceeding. If payment is made to the execution file before the 7-day objection period expires, a restitution lawsuit will no longer be filed! If the payment is made within the objection period, then the debtor can file a lawsuit for unjust enrichment.

The money claimed back by the restitution lawsuit must be paid during the enforcement proceedings and this payment must have been made because the debtor has not objected to the payment order or has objected and the objection is definitively declined. Here, the debtor is only obliged to prove that he had to pay a money that he did not owe.

The debtor who pays a time-barred debt without objecting to the statute of limitations or appealing against the statute of limitations at the enforcement court can no longer file an action for restitution, and this money cannot be recovered. The debtor who has objected as the statute of limitations but could not prove it, can file a lawsuit for restitution. A debtor who loses the negative clearance action or the action for the annulment of the objection can no longer file an action for restitution. However, if the debtor has filed a negative clearance action but has not taken an injunction to stop the proceedings and the money in the execution cashier has been paid to the creditor, the lawsuit will not be rejected as the subject of the negative clearance action will not be left behind. In this case, the case is concluded by considering it as a restitution case.

You can always contact us for assistance and information regarding negative clearence and restitution cases.